skip to main | skip to sidebar

With the first guest list to date, here's the brilliant (and noisy) Richard 'APPLES' Milward

Famously, the ears of humans and canines are susceptible to a differing range of frequencies. While dogs lovingly obey anything emitting extreme high frequencies (for example, those ‘inaudible’ whistles you’d see on One Man and His Dog), human military men have been known to use white noise as a torture technique.
On a few occasions in my life, I have been likened to a greyhound. Not only do I share the same skinny, lanky physique, I also share a love of strange frequencies, especially in the context of what’s commonly known as ‘music’.
One man’s terrible racket is another man’s Art Rock. And, while a dog may well be a man’s best friend, they might not specifically share the same taste in music.
Perhaps if Fido was given free reign in a record shop, off his lead, the following records might be brought back to you, covered in ecstatic dribble.
Roll over, Beethoven…

10) Sonic Youth – ‘The Diamond Sea’: What appears, on the surface, as a gorgeous glittering ditty, gradually plunges the unsuspecting listener into an eleven-minute tidal wave of guitar crashing and cascading backwardy drum splishy-splashing.

9) Steve Reich – ‘Four Organs’: Through the precise, repetitive stretching and lengthening of the notes of one simple chord, Steve Reich and friends produce an oscillating, mind-bending effect with four unassuming Farfisa organs. It’s a bit like listening to the Doors or Small Faces in extreme slow-motion, in a fishtank, standing on your head.

8) The Beatles – ‘Revolution 9’: A brave excursion into musique concrete, ‘Revolution 9’ may well be the loveable, longhaired Liverpudlians’ oddest moment. You certainly can’t dance to it – not even the Watusi or the Twist, despite what John Lennon keeps telling you…

7) Lou Reed – Metal Machine Music: A sardonic ‘fuck you’ to the record industry, or genius precursor to ‘noise rock’? While it’s a long stretch from his previous effort – Sally Can’t Dance – despite all the cacophony, Metal Machine Music does have some wonderfully tuneful squeaky moments!

5) Azusa Plane – ‘No Future’: While not specifically aggressive or offensive, to the untrained eardrum the late great Jason DiEmilio’s swansong appears to be merely a recording of microphones being dropped, guitars detuning, accompanied by the odd musical note here or there. Pushing the limits of his Fender to extreme minimalism, this is perhaps as delicate and heartbreaking as musique concrete can reach.

4) Velvet Underground – ‘European Son’: If Ornette Coleman had recorded Free Jazz in the heights of punk with an arm full of amphetamine, the result may have sounded like this. Paving the way for bands such as Sonic Youth and Spacemen 3, here the Velvet Underground mix melody and meltdown into a monstrous musical Molotov cocktail. Marvellous.

3) Anything by Merzbow: The musical equivalent of having your ears fed through a variety of heavy industrial machinery.

2) Atari Teenage Riot – Live at Brixton Academy 1999: Fraught by night-by-night rioting, arrests, and drug psychosis, Live at Brixton Academy 1999 is a digital primal scream; an aural document of Atari Teenage Riot’s eventual break-up. While the band have never been known for their singalong pop, this gig in London supporting Nine Inch Nails presented such an intense, pulverising barrage of computerised white noise, even hardened fans threw down their ATR t-shirts in disgust.

1) John Coltrane – Ascension: Recorded only a year after his wholesome, tuneful magnum opus, A Love Supreme, Ascension sees John and pals embarking on a quest to find complete musical freedom, encountering all manner of atonal skronk along the way. The original liner notes confess ‘this record cannot be loved or understood in one sitting’. Whether your eardrums can withstand it or not, Ascension is a revelatory masterpiece; 11 musicians smashing convention, playing with the wondrous, manic abandon of naughty schoolkids.
Posted by The DJ at 13:30 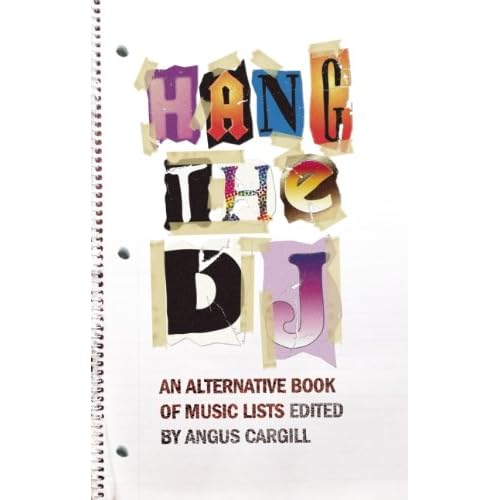 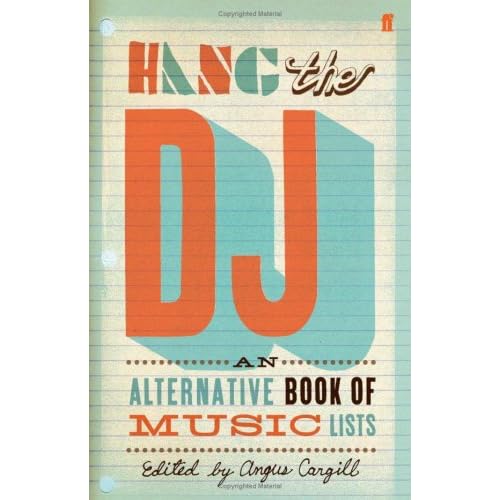 This blog is to accompany the publication of Hang the DJ (02/10/08) - a big mix tape of a book - with lists from various writers, journalists and musicians (see below). I’ll be posting off cuts and new guest lists here - alongside more general musical thoughts - over the coming months. If you’ve any comments then let me know

'Brilliant writing about some of the most unusual, terrible, and sublime moments in pop/rock history. ' Booktrust

The DJ
Angus Cargill lives in South East London and works in publishing. He has played the guitar, badly, for fifteen years.